Just like every other country, Vietnam has many occasions to commemorate and mark important historical moments. These national holidays often hold a lot of different meanings and come with a whole range of complicated ways to celebrate. For visitors, learning about a country’s public holidays in advance could become very handy in planning for your trip.  It would be very annoying or rather disappointing when you find that every store and service is closed at the time of your stay. So here is a comprehensive list of Public Holidays in Vietnam that are celebrated in Vietnam with dates and information on the origin and meaning of holidays. Check it out to experience Vietnam to the fullest! 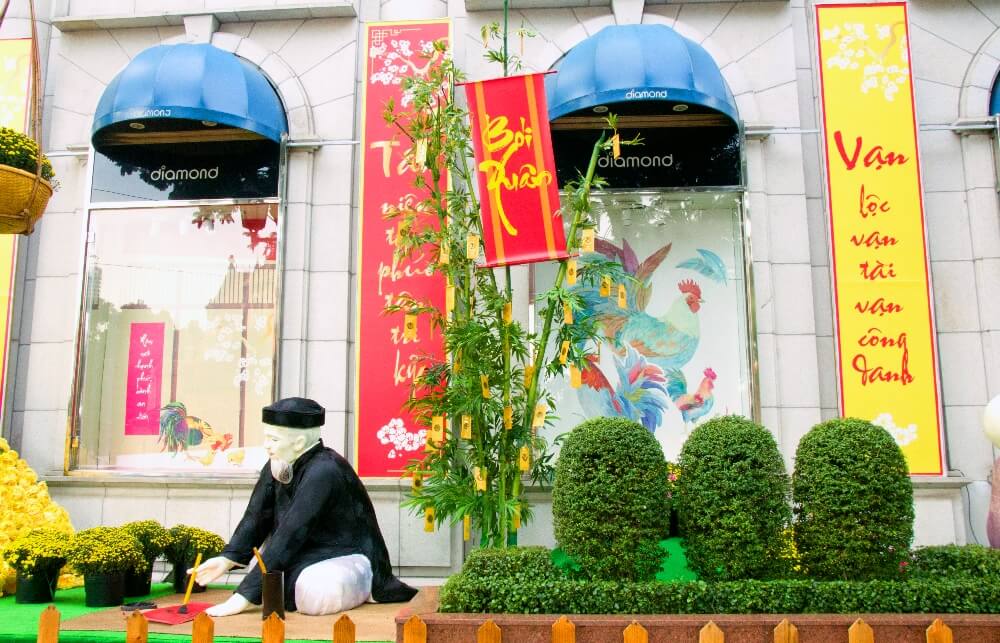 In terms of public holidays, there are six occasions in the year in which workers get the day off. As in most other nations, if a holiday falls during the weekend, workers are entitled to have the following day off as compensation.

Often known as Western New Year (Tet Tay) to distinguish from Tet Nguyen Dan (Vietnamese New Year), this is an occasion for Vietnamese people to celebrate the worldwide new year with other countries around the world. On this day, all the offices, shops and banks are closed except for some services for tourists. Actually, in Vietnam it is merely a day off for rest and relaxation as there are not many exciting activities.

Tet Nguyen Dan (or Lunar New Year or simply Tet) is the biggest, the oldest, and the most important traditional holiday of the whole nation. The words “Nguyen Dan” originated from the Han characters which basically mean “Feast of the First Morning of the first day in the year”. As Vietnam was strongly influenced by Chinese culture for over 1,000 years, the Lunar New Year was also one of the cultural features introduced during that time.

Possessing the same meaning as the Western New Year, this sacred eve is considered the transition between the old and new year. Furthermore, for Vietnamese people, Tet hugely affects the local’s conception of life, customs, and beliefs profoundly.

Every year, Tet holiday is celebrated on January 1st in Vietnam during this grand event, families often reunite together and visit their relatives. All wish for a blissful new year ahead and worship their ancestors. When it comes to customs, there are many taboos and rituals you should be aware of and of course, don’t forget the traditional Tet food!

In terms of transportation, since Tet is a time for family reunion, the demand for transportation, therefore, increases insanely. Most tickets are fully booked months before Tet and you may have to spend two or three times higher on the cost of transportation. Delays are also part of this experience. Meanwhile, markets, stores, and restaurants usually close until the fifth day (or less) of the new lunar year.

Hung Kings’ Commemoration or Death Anniversary of the Hung Kings


On the 28th of March 2007, the government officially adopted the traditional holiday commemorating the mythical Hùng Kings to its list of public holidays. Also known as Hung Temple Festival, this is the traditional ceremony of the Kinh people to remember and honor the significant contribution of the Hung Kings. These 18 kings are the ancient founders of the nation who are believed to have ruled the country during the Hong Bang period (from 2879 BC to 258 BC).

Although the whole country takes a day off to celebrate this day, the main ceremony usually takes place at the Hung Temple on Nghia Linh Mountain in Phu Tho Province (about 90 kilometers north of Hanoi) with many exciting activities. The major event starts at the foot of Nghia Linh mountain. The pilgrims keep moving up the mountain and stop at every temple before finally reaching the Hung temple on top of the mountain. Here, people will offer prayers and incense to the Hung Kings to pay tribute.

Before the official ceremony falling on the 10th day of the third lunar month, there are also other important rituals to worship the death anniversary of the Hung Kings’ father Lac Long Quan and mother Au Co. Moreover, the cooking contest of Vietnam’s traditional cakes (banh chung and banh day), the exhibition of items donated to the temple, and cultural performances also make Hung Kings’ Commemoration a joyful occasion to preserve and promote Vietnamese culture and values. These worshipping traditions have formed an essential part of people’s spiritual lives and were recognized as a UNESCO Intangible Cultural Heritage of Humanity in 2012.

These 18 kings are the ancient founders of the nation who are believed to have ruled the country during the Hong Bang period (from 2879 BC to 258 BC).

This holiday is to mark the liberation of Saigon and reunification of Vietnam in 1975 when Republican President Duong Van Minh and his people were arrested and surrendered unconditionally to the forces of the Provisional Revolutionary Government of the Republic of South Vietnam. It was the direct result of the 1975 Spring Campaign and was a milestone in Vietnamese history.

This is a commemorative day for the soldiers who sacrificed their lives to defend their homeland and as such, is a day of reflection. Therefore, the anniversary is marked by several festivals around the date.

There are live music shows that perform victorious songs from the war in major cities, memorial programs, and music performances on TV. And if you’re in town for the holiday, you’ll notice that every house hangs a red flag in front of their door and the streets explode with red banners, flags, and neon lights. Especially in Ho Chi Minh City, there are lines of parades in the main boulevards created by a large number of both Vietnamese people and international tourists. All these things are done to demonstrate the Vietnamese people’s patriotism and respect to their predecessors. Meanwhile, all the government locations (including schools, post offices, etc…) will be closed during this period. You can still do some shopping or dine out because most shops and markets will still be open.

International Labor Day or May Day is a celebration of laborers and the working class and this occurs not only in Vietnam but also in more than 80 other countries. As it is celebrated right after the Reunification Day, the two holidays are normally joined together into one break. People often take this chance to have a quick vacation and all the stores are closed so you can expect to find the city streets empty and quiet.

This day was the day President Ho Chi Minh read the Declaration of Independence at Ba Dinh Square, officially claiming the independence and sovereignty of Vietnam. It was marked as a major turning point of Vietnam’s history. As one of the public holidays in Vietnam, people are allowed to have a day-break from work to commemorate the event’s historical significance. Like Reunification Day, you can catch sight of Vietnam flags everywhere as well as red and yellow decorative arts. Moreover, to celebrate such a special day for the whole nation, an annual march is also organized on the Ba Dinh Square with beautiful fireworks in the major cities of Vietnam.

So, if you happen to be in the country on these holidays, you should know what to expect. Transport normally becomes a big issue when there is a mass exodus of city people into the countryside. The prices are also expected to be significantly higher than usual for accommodations, coffee shops, movie theaters, etc… Not to mention the difficulties you may come across in getting services, so traveling Vietnam on public holidays might not be the soundest choice for your visit. However, if you are a big fan of exotic culture, consider this a great opportunity to delve into mesmeric Vietnamese culture or try to arrange your trip in off-the-beaten-track destinations. These days are definitely in my opinion, ones not to miss!

Enjoyed this article and would like more fun information on what to see, do, and eat in Vietnam? Follow us at The Christina’s Blog!

The post An Overview of Holidays in Vietnam appeared first on The Christina's Blog.