When Chinese refugees came to Cho Lon (Saigon’s Chinatown) over 200 years ago, not only did they bring their delicious cuisine, but they also brought with them their traditions, culture, and etiquette.  In Chinatown, there are certain rules that are known among those that live there, but are generally unspoken of. Visitors are usually completely clueless, and sometimes even end up offending others with their actions. Are you curious yet? Keep scrolling down for a list of interesting “secrets”, some local restaurants that sell good food and safety advice. 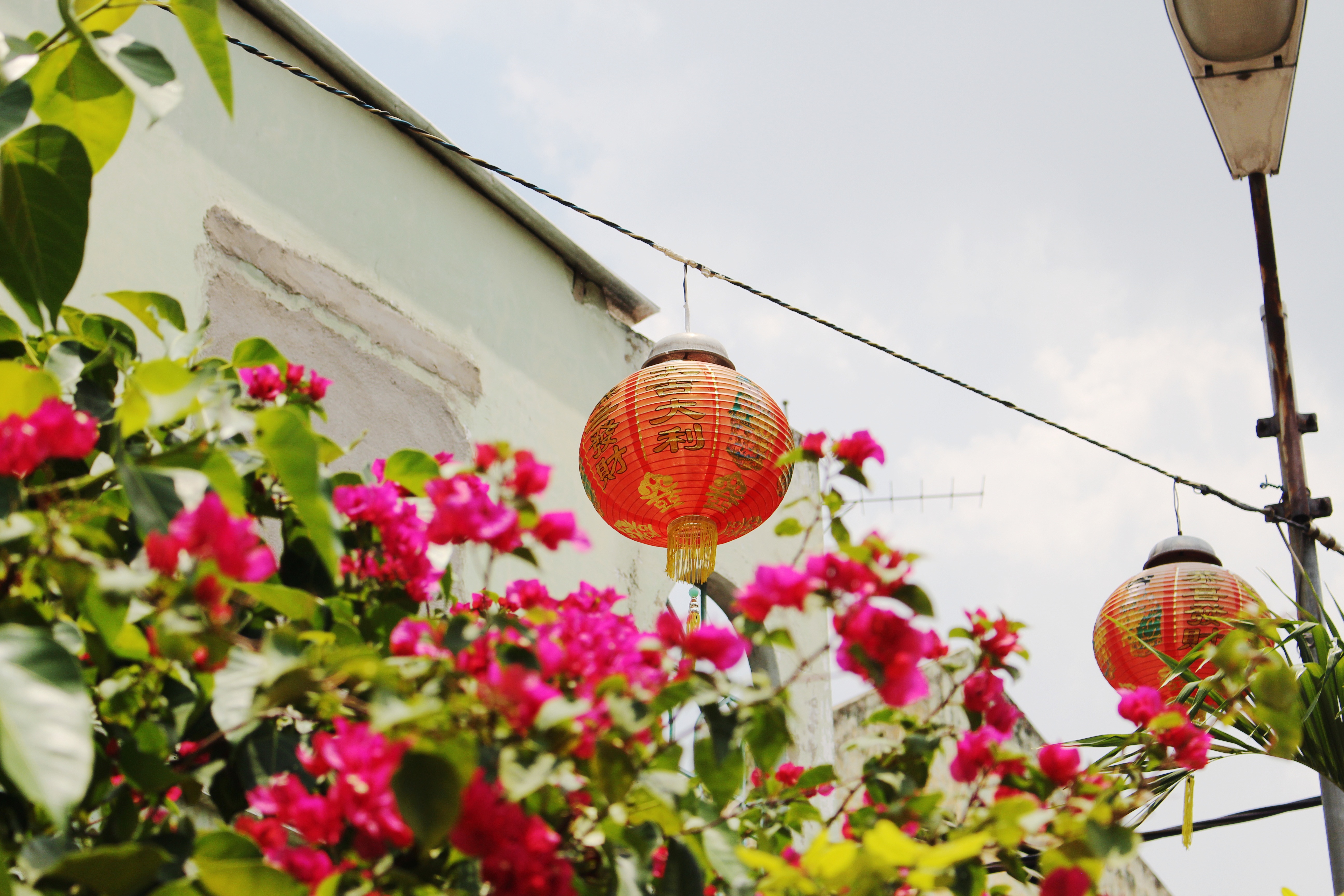 Spreading over half of District 5, and a considerable section of District 6, Cho Lon is the biggest Chinatown of Vietnam. The name “Cho Lon” directly translates to Big Market. The original Cantonese name is “Tai-Ngon” and Mandarin name is “Di’an”, both of which mean “embankment.”

Before merging with the Saigon in the 1930’s, Cho Lon used to be a city in itself. In the past, many Chinese refugees ran away from war in their country, and resettled in Cho Lon, creating a Chinese community overseas. The Minh Huong village was the first Chinese settlement. In 1778 and 1782, the Hoa people from Pho Islet (Bien Hoa, nowadays) ran away from the massacre of Tay Son, looking for a place to resettle. Here they built high embankments against the flows of the river and called the new land “Tai-Ngon.”

During the Vietnam War, Cho Lon was a big black market where soldiers and deserters traded US Army-issued items and various American goods. 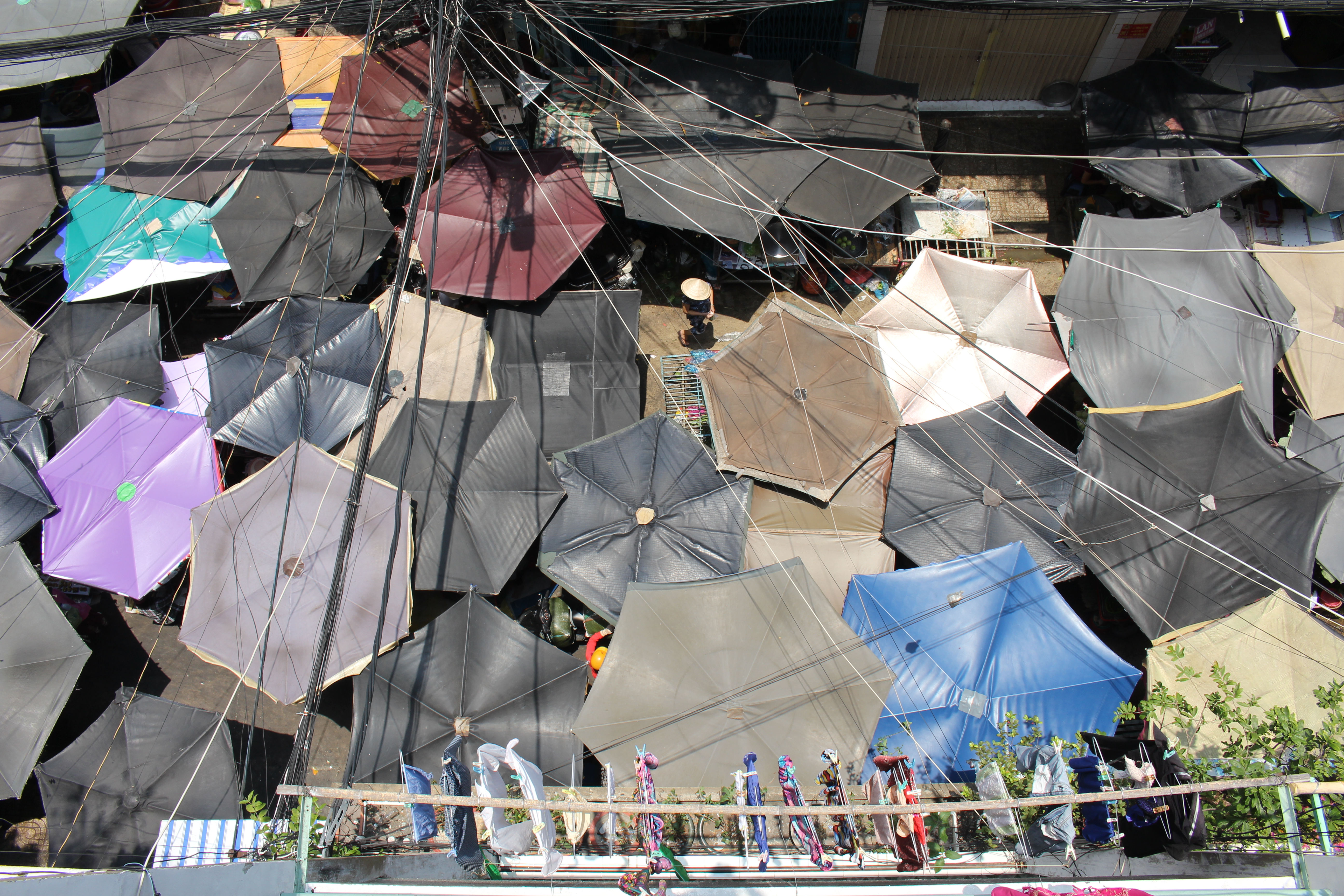 The Hoa community teaches their kids to always preserve the rich customs and culture alive. The children are told to speak Chinese when at home and also told to follow these following rules:

On the 15th and 16th of every month in the lunar calendar, many Hoa people usually go to the pagoda to pray for luck, health, wealth and love. In Cho Lon, there are many charming Chinese-style pagodas, built centuries ago, and people go to different pagodas to pray for different things. 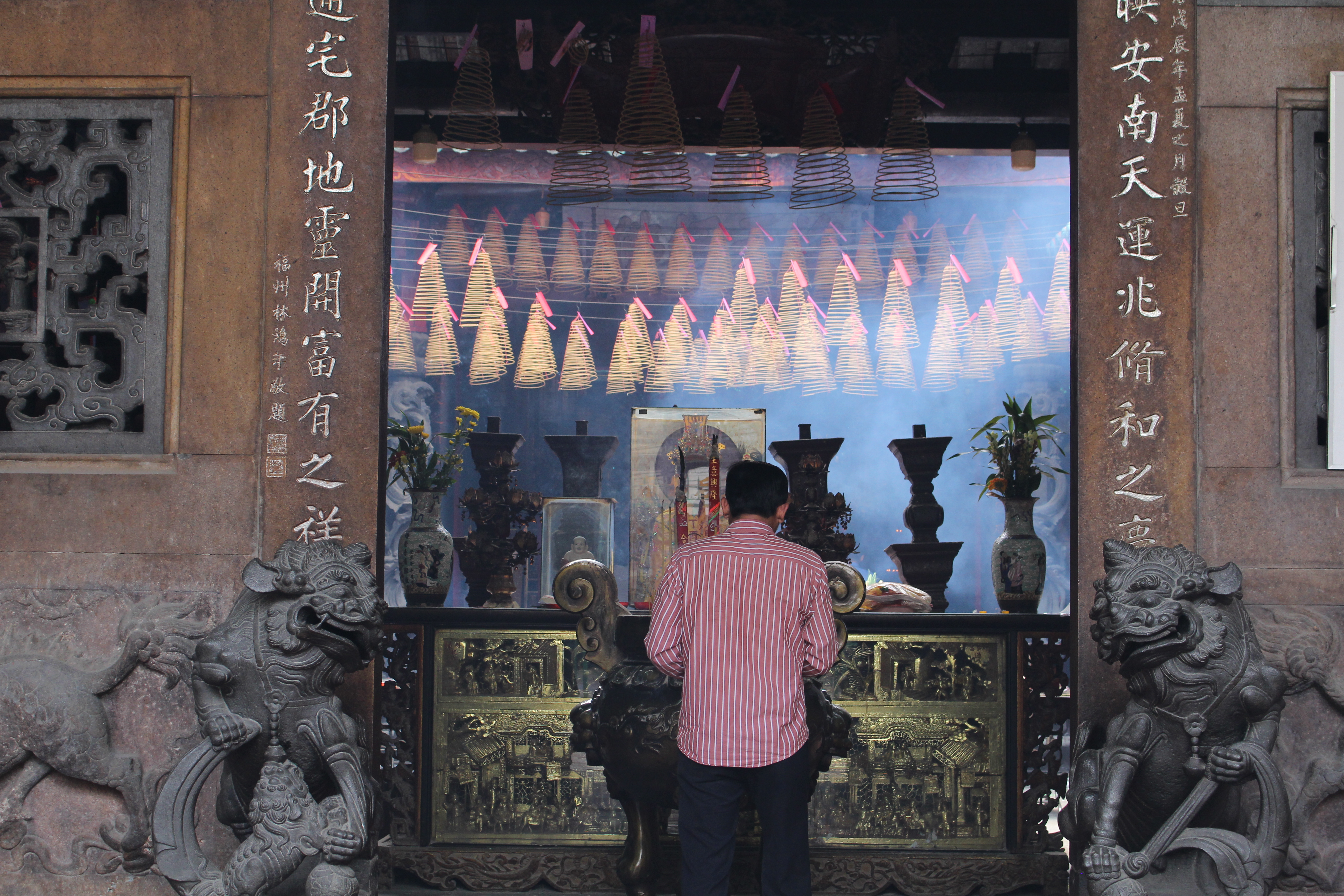 For example: Many Hoa people go to Chua Minh Huong pagoda (184, Hong Bang, Ward 6, District 5), to pray for prosperity and fortune before they start their business. Those who are seeking for the other half in their lives will pray for love in Chua Ong pagoda (676 Nguyen Trai, Ward 11, District 5). Chua Ba Thien Hau pagoda (710 Nguyen Trai, Ward 11, District 5) is dedicated to goddess Thien Hau and here people go to ask for safety and protection for themselves and their loved ones. Which one will you visit? Or will you visit all three? Even if you don’t believe in prayers coming true, you can still go and visit these temples to revel at their beauties and watch others as they ask for peace of mind.

Superstitions are everywhere but the Hoa people take it to a whole new level. Some examples are:

a. Don’t be the first to buy from a shop if you believe that somehow you may bring bad luck to the shop and prevent them from attracting more customers.

Each business has its ups and downs. But some superstitious Hoa people (and even some Vietnamese) believe that there are people that bring good vibes and bad vibes. If a person with good vibes walks in, the business will blossom, which means that if a person with bad vibes walks in, the opposite will happen. The bad vibes brought in by this person will send negative energy that makes others not want to walk in. Or that is what is thought, anyway. 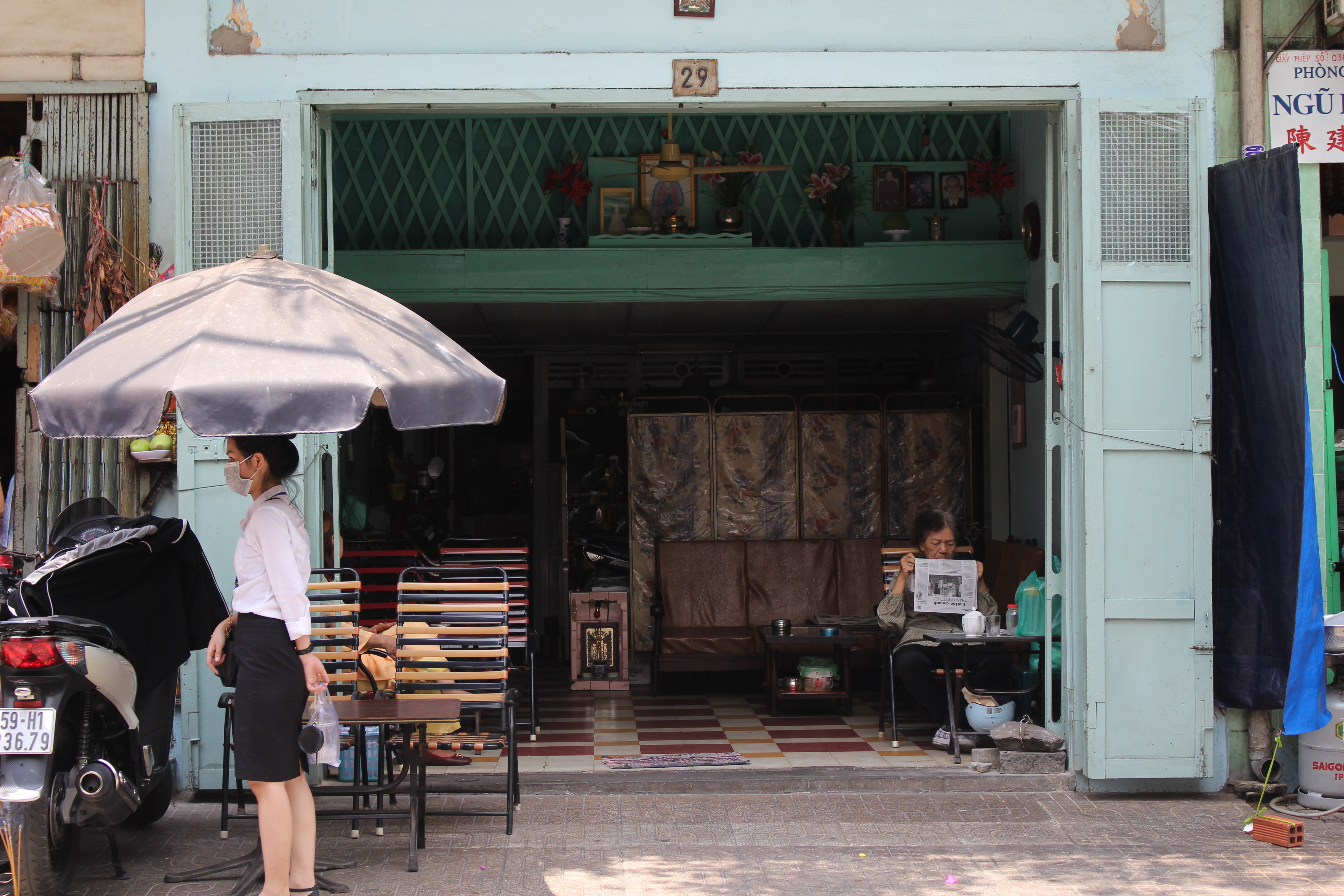 How to tell if you are the one bringing in bad vibes?

b. Don’t get a haircut in January or the first day of every month (Lunar calendar) because it is taboo

Although this is based on no science what so ever, many Hoa people still avoid having haircut in January or the first day of the month in the Lunar calendar because they think it is going to bring them bad luck and that they could lose money after.

It is said that if there are 3 people in a photo, the one in the middle will die first. Though it is obviously odd, you should avoid taking pictures of 3 when you are with Hoa people (and some Viet as well).

July is said to be the month of “homeless souls” in Vietnam. Besides making ceremonial offerings to pray for the wandering souls every day, many Hoa families in Cho Lon usually add money to their offerings on full moon days. After the worshipping ceremony, the money and food (usually fruits and sweets) will be thrown on the street. The amount of money depends on the size of the family business. People believe that the more money they sacrifice, the more successful their business will be. 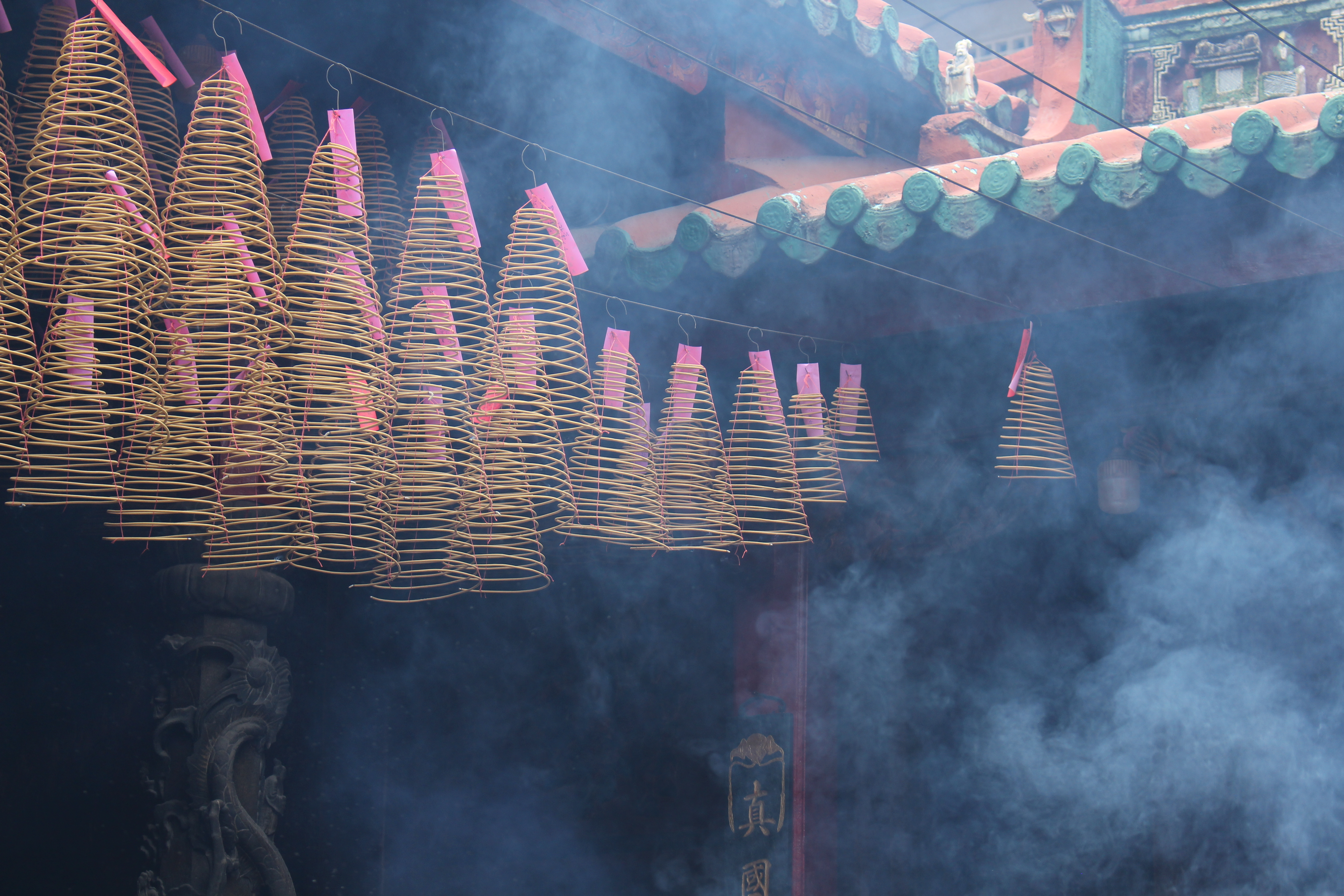 3. Don’t gift certain things because they are taboo

If you are invited as a guest of a Hoa family in Cho Lon, be careful on what you gift them. Here are some items that are considered taboo. 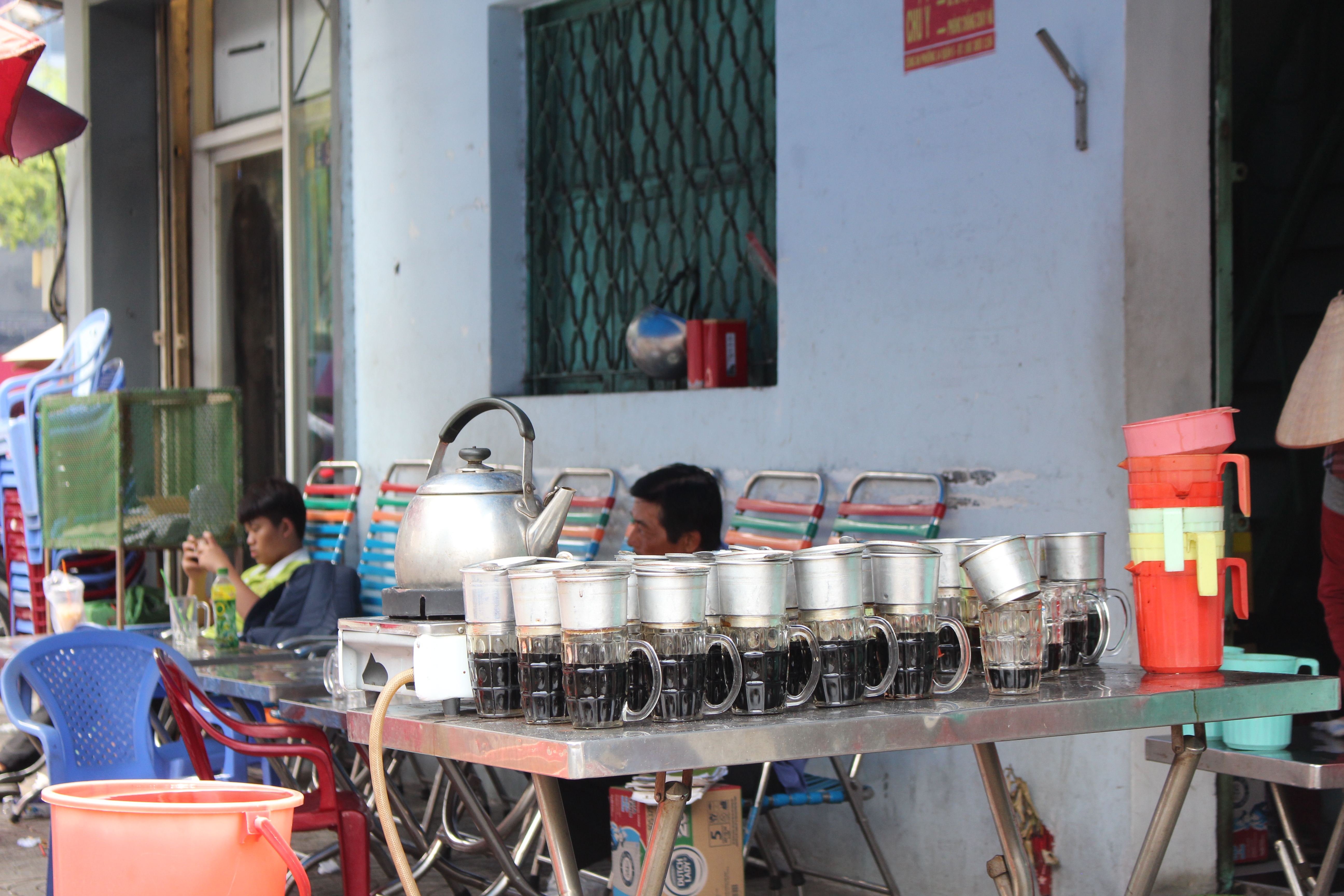 Note: Number 4 is considered to be the number of death (once again an issue with pronunciation – number 4 in Chinese is similar to the word of death. So you shouldn’t bring anything in sets of 4. On the other hand, 8 is the number of luck.

When you attend a lunch or dinner with a Hoa family, there are 2 things you should not do:

This is all for the superstitions that the Hoa people believe. And now for some food recommendations…

Chinatown is a heaven for foodies – you can find lots of different dishes for cheap prices. Here are a few you should try:

Banh xeo is essentially Vietnamese pancake. The way it is prepared differs throughout the country. In Cho Lon, the preparation follows southern methods, making the end product a shiny yellow crepe with prawns, sliced pork onion and bean sprouts inside. When you eat it, you will roll a piece within a salad leaf and dip it in sweet fish sauce. 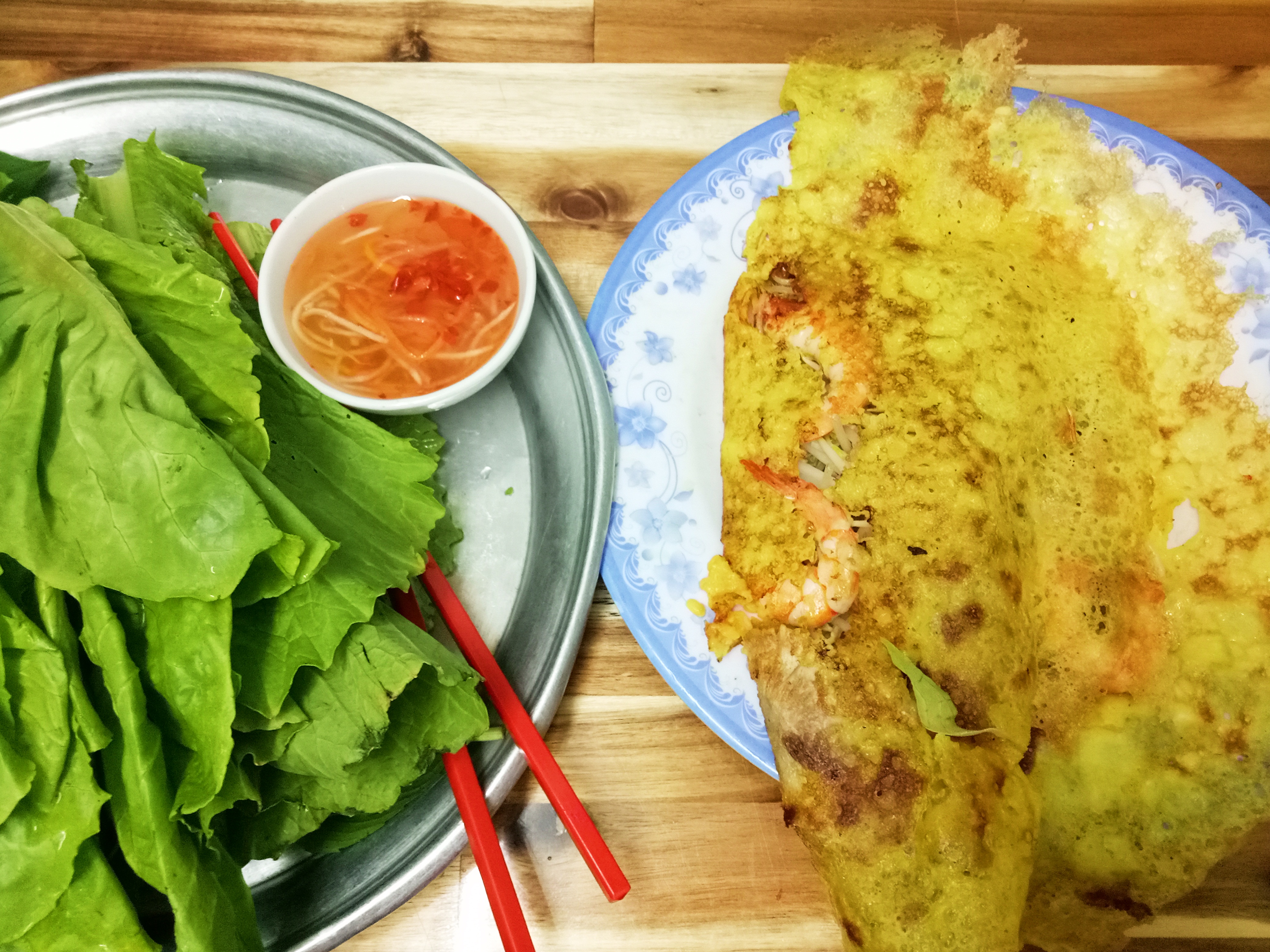 Banh xeo Le Quang Sung at 81A Le Quang Sung, Ward 12, District 6 is the best restaurant according to the locals in Cho Lon. It was founded more than 70 years ago. The pancake wrapper is crispy, the prawns are fresh and the fish sauce served there is delicious. Besides banh xeo, they also serve other food such as: banh cong (Vietnamese fried shrimp cake) and spring rolls. The price is quite reasonable – only 45,000 VNĐ for a banh xeo, 12,000 VND for a banh cong and 6,000 VNĐ for 1 spring roll.

Read more: All About Banh Xeo

It would remiss of me to not mention pho, especially when we are talking about food. Pho is Vietnam’s de-facto national dish. Find your best bowl of Pho in district 6 at Pho Xuan Mai (63 Nguyen Thi Nho, Ward 2, District 6)

Together with bánh mì, xôi (sticky rice) is a common street food that Vietnamese people love to eat during any time of the day. Xôi Bát Bửu is a Chinese dish that that is hard to find anywhere else other than in Chinatown. I personally love the flavor you taste from the mixed ingredients – it’s sweet and sour from the char siu (grilled pork), Chinese sausage, salted radish and dried shrimp. It also smells good because of the soy sauce used and the use of shiitake mushrooms makes it a wonderful addition in terms of taste and texture. 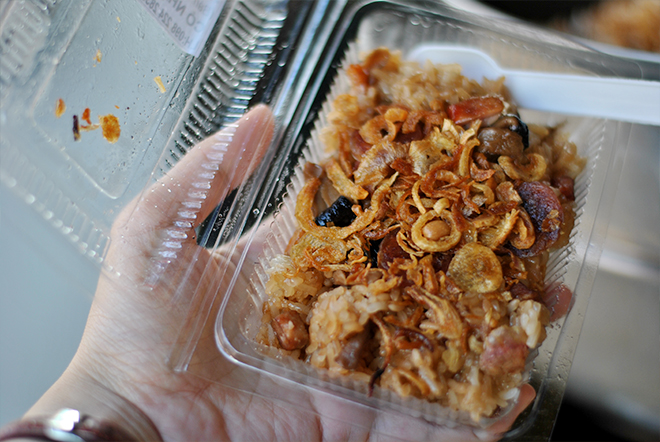 You can find bubble tea in every corner of Saigon. But what makes Chinatown’s bubble tea special is the topping. Instead of using tapioca pearls to make the bubble balls, this one shop in Cho Lon decided to be creative by using chestnuts covered with flour and so making the bubbles crunchier when you chew. The cheese balls and cheese pudding served there are also worth a try. 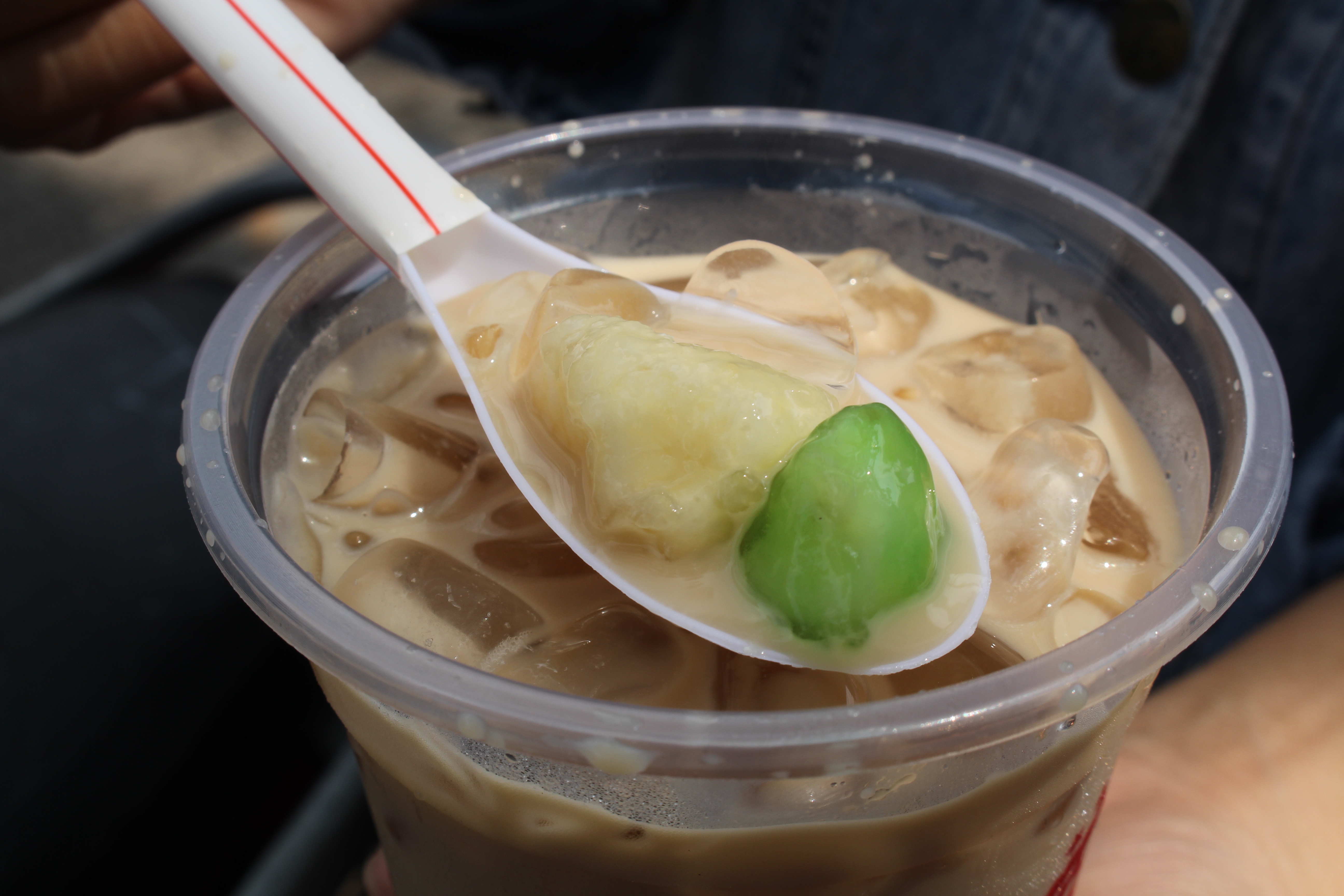 It would be remiss not to mention Chinese dim sum.  Just like sushi, dim sum in Saigon is mainly sold in fancy restaurants at higher prices. But hey, when you are in Chinatown, you can expect to find mouth-watering dim sum on the streets and they barely cost you a dollar.

On 201 Le Quang Sung, Ward 6, District 6 there is a small place that sells dim sum for only 1,000 VNĐ for a piece of ha cao and 3,000 VNĐ for a a piece of xiu mai. Xiu Mai is definitely more delicious to me. Besides ha cao and xiu mai, you can also find banh he (Chinese chive cake).

The Chinese egg tea soup is made of peeled egg, Chinese herbal tea, sugar and water. Certainly sounds weird to put egg in tea, but this is worth a try! 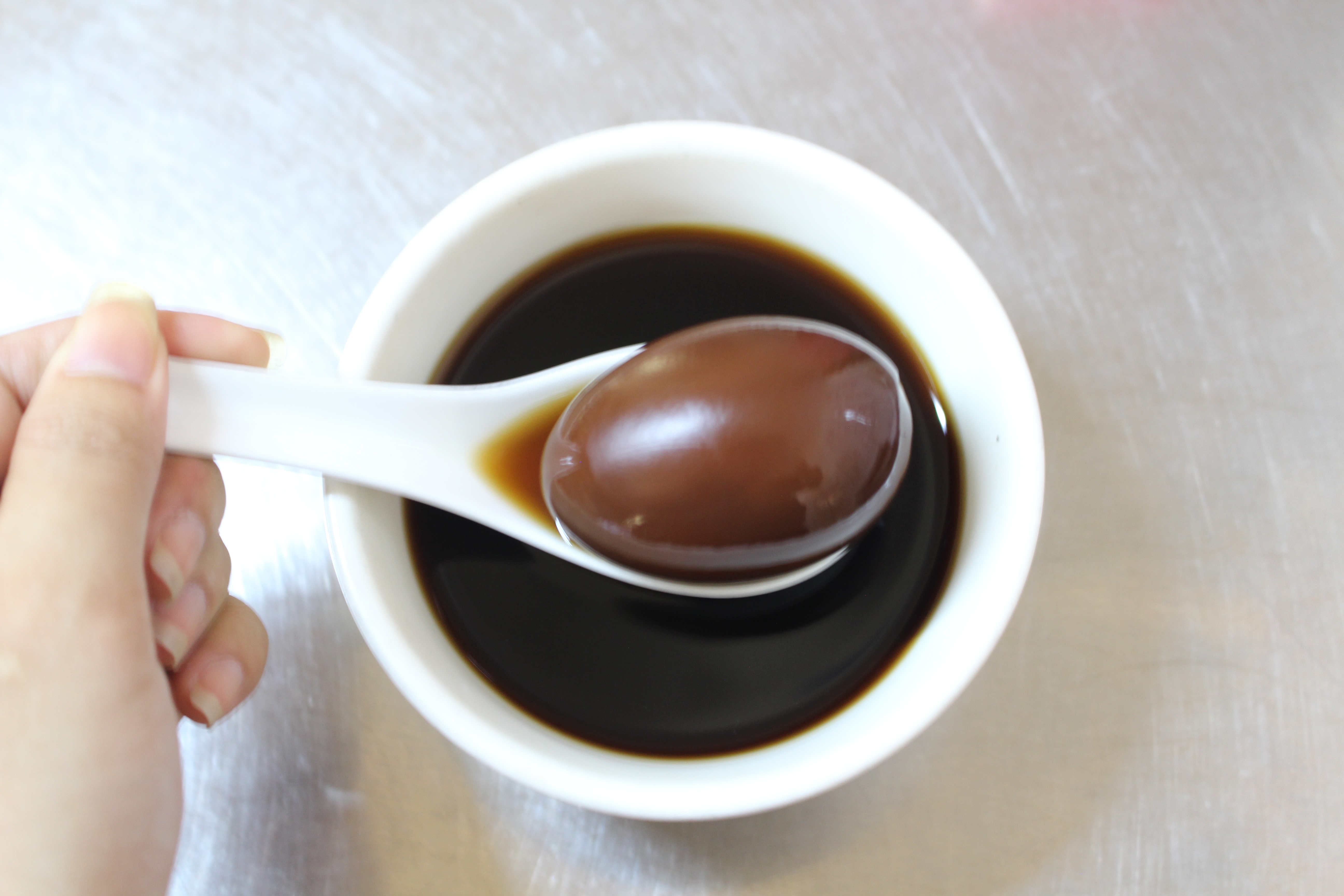 There are some places where you can find hot ga tra in Chinatown:

Read more: The Top 9 Vietnamese Food You Should Really Be Trying

Prevention is better than cure and this can not only be applied to diseases but also to road safety and pickpockets! Here are a few tips for you that will be useful when traveling to Cho Lon: 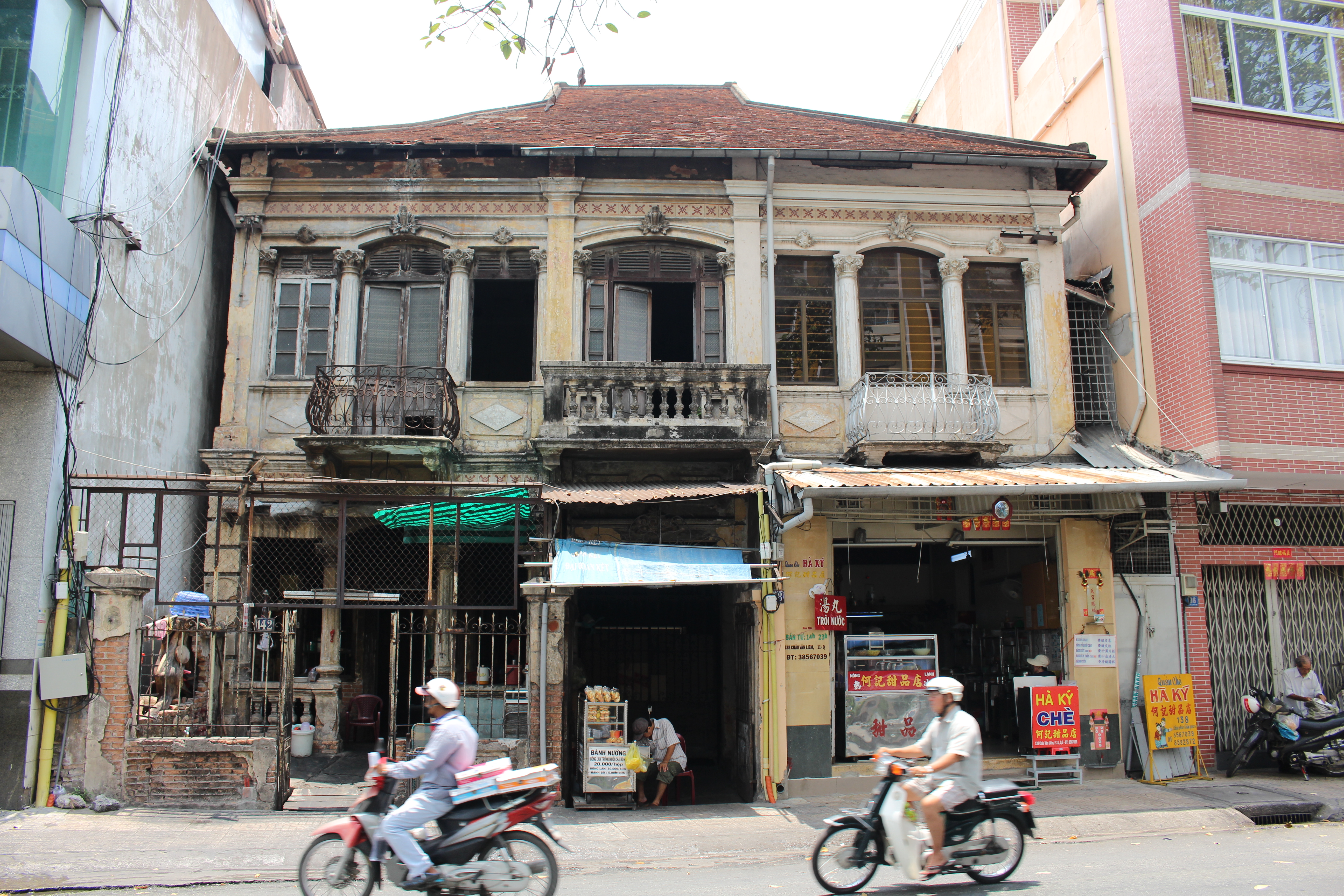 The idea is to just be rational and weary about your surroundings.

That was a lot to take in, right? Why not share this experience with a local friend as they guide you through Saigon? We offer a donation-based city tour lead by volunteer university students who love connecting with travelers and more importantly, are authentic experts at places to go and things to do in this city. To start off, we recommend sites which are famous tourist attractions like the War Remnants Museum or Central Post Office for you to try in case you are not sure where to go.

The better part of this special tour is it’s totally possible to customize to your personal preference! If Cho Lon has just landed on your checklist, just simply tell our guides that you would like to visit Cho Lon, or any other interesting spots. They will then work with you to see how you can make the most of your time. One thing to remember is that this is a donation-based tour so you’ll pay for your expenses and all the donations from guests will benefit the students directly. Click here for more detailed information about Onetrip Student City Tour in Saigon, and if you’re interested, don’t hesitate to book with us!

By spending a day in Cho Lon, you will learn many things, especially about the customs of the Hoa people living in Saigon. Why don’t you take a day or two to explore this area and then leave a comment for me detailing your adventures? Have fun and keep your belongings safe!

Enjoyed this article and would like more fun information on what to see, do and eat in Vietnam? Follow us at The Christina’s Blog!

The post The Unspoken Rules of Cho Lon (Saigon’s Chinatown) appeared first on The Christina's Blog.