The Hanoi Old Quarter is the common name of an urban area established long ago outside the Imperial City of Thang Long. Since 1010, Thang Long, which would later become Hanoi, was chosen as the capital city of Dai Viet Empire (ancient kingdom of Vietnam) under the rule of the Ly family. During this era, Vietnam developed very fast in terms of both economy and military.

Thang Long City was built in three parts. The outermost layer was called La Thanh (named after the previous name which was Dai La city), restricted by the Hong river, To Lich river, and Kim Nguu river. La Thanh had high walls to protect the people and buildings inside the city. The middle layer was called Hoang Thanh (meaning the Imperial City) and the last layer was Cam Thanh (the Forbidden City). The king and his family lived in the Forbidden City. The area between La Thanh and Hoang Thanh was for the regular citizens, hence it easily developed as a busy business zone.

(Doan Mon, the gate of Thang Long leading to the past Forbidden City, built in Later Le Dynasty, 15th to 18th century)

The Hanoi Old Quarter was the most hustling and bustling area of Thang Long Capital City where people visited, purchased, and sold their goods. For more than 1,000 years, this quarter has still retained a few of its ancient features.

People usually say the phrase “Ha Noi bam sau pho phuong”, which means Hanoi Old Quarter has 36 streets. However, this saying is not true! The number 36 comes from a poem written by Duong Quang Ham, which lists the 36 streets of the Hanoi Old Quarter. (Click here to read the poem in Vietnamese!)

The Old Quarter actually has more than 76 streets with an area of about 100 hectares. Hanoi’s authorities actually worked to preserve a lot of the Old Quarter which is why there are 76 preserved streets. In fact, there are many old streets located out of the quarter that have been modernized, the old town represents those 76 streets that still display their special characteristics.

Facts Behind the Street Names

The most famous feature of the Hanoi Old Quarter is its handicraft streets. In the past, handicraftsmen from all over the country came to Thang Long and started their career in the Old Quarter. They separated into streets and each street created and sold different products. Businessmen traveling by boat would visit this area and purchase goods, so day by day the handicraft streets began to flourish. Then, people named the street after its main product with the word “Hang” to signify a store or a series of stores.

However, this distinct naming was only true in the past. Most of the streets now do not specialize in one product but you can find a diversity of goods on each street. If you want to get a taste of the past, you can find a few streets selling traditional products.

Here are a few explanations of the origin of some street names:

Today, the Hanoi Old Quarter is the leading tourist destination of Hanoi city, where tourists can find many hotels and travel agents. The business activities in this quarter are also the most active in all of Hanoi. Under the preservation of Hanoi’s authority, the Hanoi Old Quarter luckily retains a part of the old architecture as well as its ancient characteristics.

The narrow streets which used to sell specialized handmade products now are trading a variety of goods to satisfy the demands of tourists coming to Hanoi. Since the 15th century, when Hanoi was named Ke Cho (meaning a busy business zone), Western travelers and traders have visited and complimented the development of this quarter. In the present time, more and more travelers from all over the world visit Hanoi and its Old Quarter, making it busier and more famous than ever.

Where to Visit in the Hanoi Old Quarter

The Hanoi Old Quarter is a large area but you can easily visit all the famous sites on foot. Because the streets are narrow and full of people, walking is perfect for getting around in this area.

Hoan Kiem means giving back the sword. Another name of this lake is Guom Lake meaning the sword. Hoan Kiem Lake was named after the legend of the first king of the later Le Dynasty of Vietnamese history. Legend says that during the hard times when the Vietnamese fought against the Ming Dynasty of ancient China for freedom, God Kim Quy (meaning the golden tortoise god) arrived and gave a holy sword to General Le Loi. After receiving the holy sword, Le Loi’s army became stronger and stronger and always won in battles. Eventually, Le Loi led the army and the people to drive the Ming people out of Vietnam. He came to the throne and named his ruling era Thuan Thien, which means obedience to god.

One day, when King Le Loi sat in a boat in Ta Vong Lake, the previous name of Hoan Kiem Lake, God Kim Quy appeared again and asked for the sword back. The king respectfully returned the sword. Since then, this lake goes by the name of Hoan Kiem.

Hoan Kiem Lake is located right next to the Hanoi Old Quarter. You can see the Thap Rua (the Tortoise Tower) that stands lonely in the middle of the lake. You can also visit the nearby relics like Ngoc Son Temple, The Huc Bridge, and But Tower. 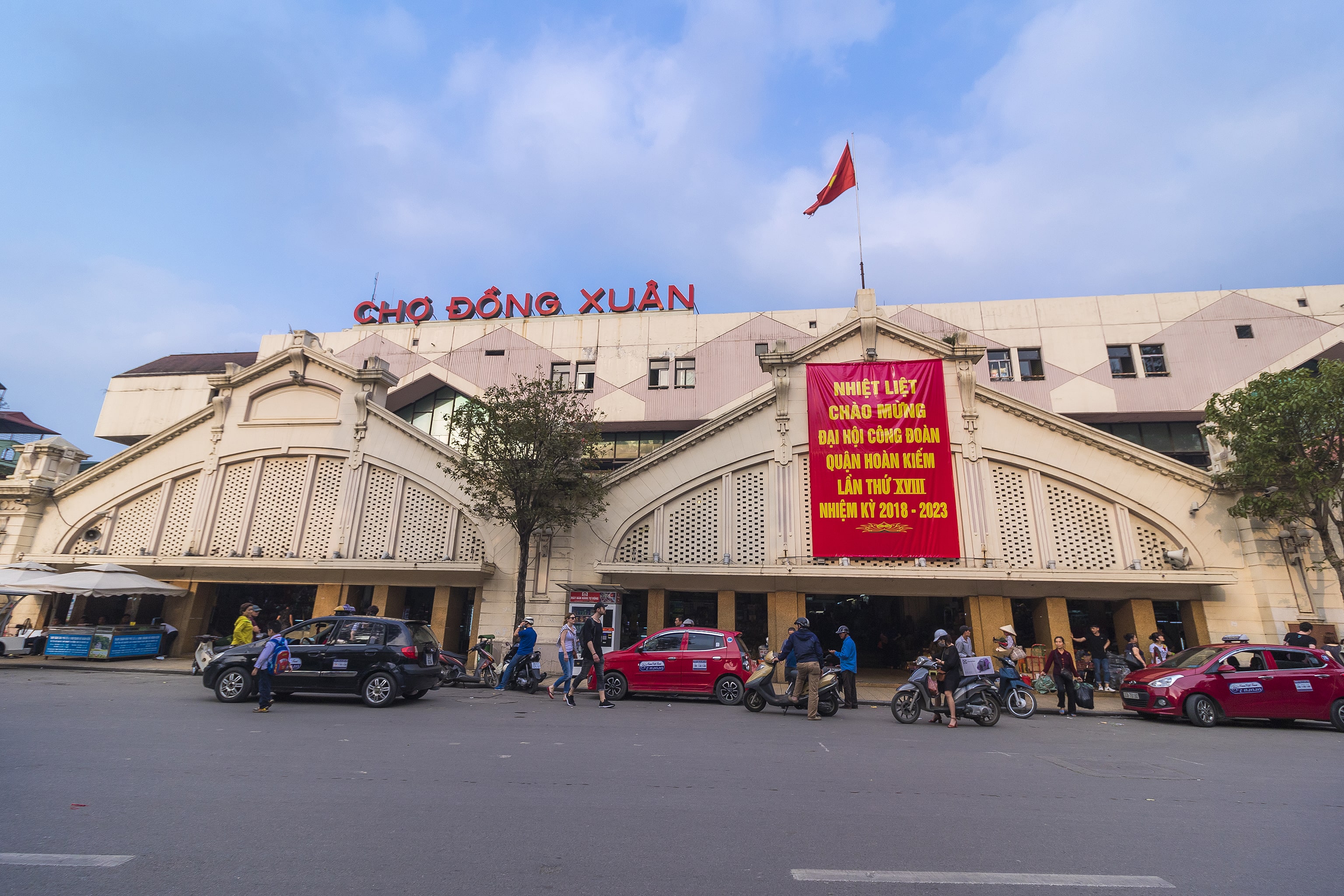 This market sells a lot of products, from clothes, foods, biscuits, to Hanoi’s specialties. Visit Dong Xuan Market and buy your friends and family meaningful souvenirs.

You will find an old house at 87, Ma May street built in the 19th century. It has changed owners many times and now it belongs to Hanoi’s authority for preservation purposes. This house is a popular tourism stop and source of historical and architectural information. During special occasions like national holidays or Mid-Autumn festival (on the 15th day of the Lunar calendar in August), this house will host performances of Hanoin traditional arts.

Ma May Old House opens every day to welcome tourists. You can also explore the house with a ticket of 10,000 VND.

This is a small street located deep inside the Old Quarter with a reputation for having many beer restaurants. You will find that Ta Hien street is always crowded with people. Tourists and locals come to Ta Hien street to enjoy grilled food and sip a cup of cool beer when chatting with one another. The street is patterned with grey brick, calling to mind the elegance and grace of the old street.

Hang Ma is the most colorful street of the Hanoi Old Quarter, especially during festivals like Tet (Vietnamese New Year), Vu Lan (Buddhist festival to praise our parents on 15th July, Lunar calendar), and Mid-Autumn festival. As I mentioned above, Hang Ma street sells handicraft products for decoration, worship, and toys. It’s also the place of lively lanterns of plastic and paper. At night, locals light up the lanterns, making Hang Ma a street of red and yellow lights.

O Quan Chuong is one of the 21 remaining gates of the old Thang Long city and was designed based on the architecture of an observatory. The old name of this gate is Dong Ha Mon, which mean the gate of the eastern river. In 1873, when the French colonies attacked Hanoi city, an officer named Chuong led his people to fight against the invaders and died when protecting this gate, preventing the enemies from entering the city. To commemorate him, locals renamed the gate to O Quan Chuong, which means the gate of Chuong officer. This gate was built in 1749 and reconstructed in 1817, retaining the architecture of the later Le Dynasty.

Hanoi not only possesses traditional houses, but it also has delicious and traditional dishes. You can find many newly-built food stalls and restaurants around the Old Quarter. However, to experience the original tastes as well as the spirits of Hanoi’s food, only the long-lasting stalls and restaurants can satisfy this need. Here are my recommendations to try food in the Hanoi Old Quarter.

Bun Cha on Hang Than street: Bun cha is a very special dish of Hanoi, which has simple ingredients but a powerful taste. A portion of bun cha consists of a dish of rice noodles, a bowl of fish-sauce soup mixed with vinegar, pieces of grilled pork, and a dish of fresh vegetables. Bun cha at number 34 Hang Quat street in the Old Quarter is recommended by many eaters. 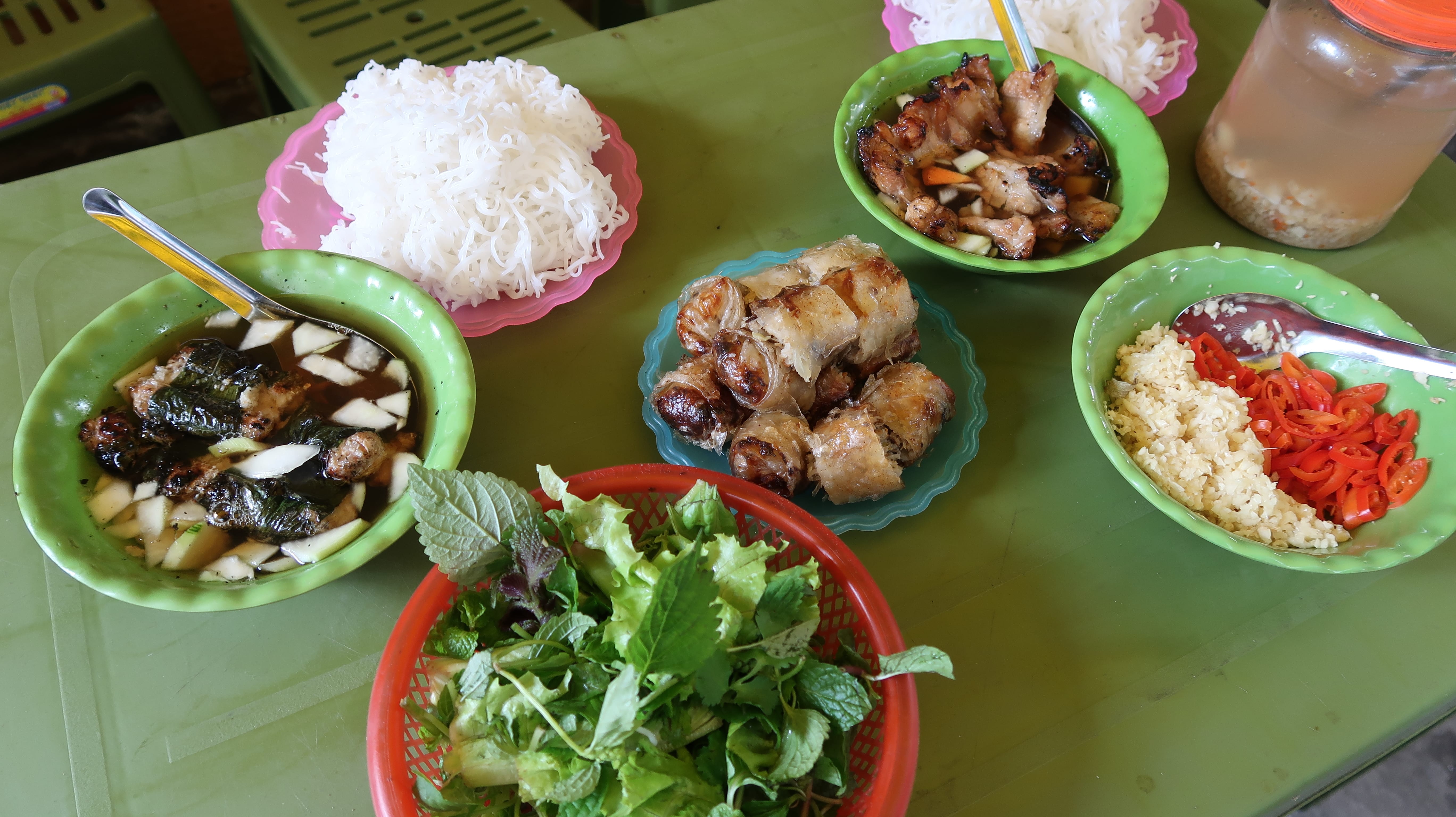 Pho Bat Dan: Pho is the symbol of Vietnamese cuisine and very famous in the world. This rice noodle beef soup has a long history and is preferred by Hanoians. Now pho can be found all over this country, even restaurants all over the world, but pho in Hanoi still offers the special taste of its origin. Pho restaurant at 49 Bat Dan street is believed to have the most traditional taste of this dish.

Bun Thang in Cau Go street: Bun thang is a familiar dish to Hanoi citizens. This dish is a mixture of many nutritious ingredients like pork bone, duck eggs, shrimp, mushroom, and vegetables. These ingredients make up the soup and it’s enjoyed with noodles. Bun Thang at number 32 Cau Go street is a must-visit restaurant to enjoy this special dish.

Bun Dau Mam Tom in Phat Loc Alley: Bun is rice noodles, dau is fried tofu, and man tom is shrimp-sauce. Bun dau mam tom is simply these ingredients, but together, it creates such an indispensable taste that you will want to eat it forever. You can also add grilled com (com is the immature rice grains), boiled pork, or grilled pork. Bun dau mam tom at number 49 and 55 of Phat Loc alley is the leading choice of locals when they want to enjoy this dish.

I hope this article gave you an overall knowledge about our Hanoi Old Quarter. Now you can better plan your trip to visit Hanoi.

Follow our Christina’s Blog to get more information about traveling in Vietnam. Here are some recommended articles for you:

A Comprehensive Guide to Vietnamese Food in Hanoi

Vietnamese Temple of Literature in Hanoi: A Thousand Years in A Blink

The post Hanoi Old Quarter: The Ancient Beauty of the 36 Streets appeared first on The Christina's Blog.